forceful, demanding attention, convincing, and having a powerful and irresistible effect.

Jenny Setchell’s compelling story of how the organ fraternity in New Zealand has been brought together through a deadly and crippling force of nature—the 6.5 magnitude earthquake of February 2011 and the 10,000 resulting aftershocks, demands our attention. Jenny, and her husband, Martin Setchell, are organists from Christchurch, New Zealand.  Their lives changed dramatically a year ago!

Of course I had heard, seen and read the news of the devastation caused by the Christchurch earthquake in the days immediately following this horrible natural disaster, but until I happened upon Jenny’s nzorgan.org website, the reality of the quake and the effect it had on the lives of organists was not apparent to me.  I had seen photos of the crumpled steeple of the Anglican Cathedral in the city square.  One of my students had been to Christchurch several months earlier and had come back with photos of the organ’s facade complete with its enchamade pipes, so as those news flashes of the severely damaged cathedral crossed my television screen I thought fleetingly about the organ housed within its walls.  What had happened to it?

Jenny shared some of her poignant thoughts on how the disaster affected the lives of organists, organ builders, lovers of great organ music, and church musicians with me for our March 2012 issue of the Pro-Motion Music newsletter.  Excerpts of this compelling story will be found in this and subsequent blog posts.

Pale daylight through side doors throws ghostly shafts into the dark, silent, once alive and buzzing, 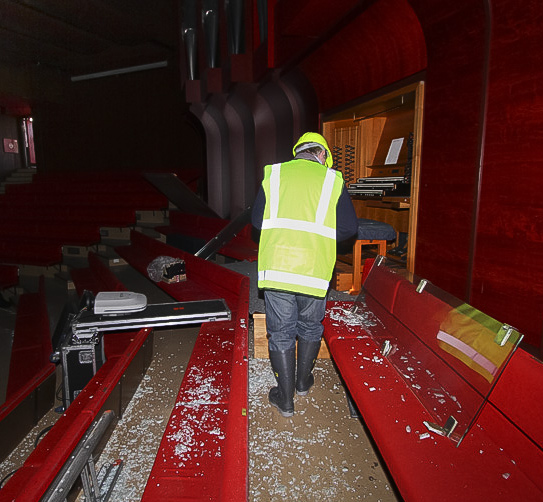 2500-seating capacity auditorium. Disembodied hi-viz jackets, shimmering along the choir stalls, appear to move of their own accord.  The only sounds are water dripping somewhere under the stage, and broken glass crunching under our steel-capped boots. No background electrical hum, clangs, bangs, work-a-day noise. No traffic, no voices, no pulse of life. It’s cold, and smells damp and earthy. We keep our ears pricked up for the sounds of an approaching rumble that might herald another aftershock.

I pick my way gingerly behind  my husband Martin Setchell, the  city organist who has the care of this organ, and two engineers on our first foray into the auditorium, to see how the Rieger organ has fared after the February 22nd quake and other substantial aftershocks. Knowing the fate of so many other organs in churches around our city, we are all nervous.

Smashed glass has come from one of the console doors. Both had been removed by the Rieger staff as they were finishing  a six-week organ expansion programme which installed 12 new ranks. Neither were in the building when the quake hit.

Inside the case, our headlamps reveal a few toppled pipes, broken racks, bent feet; some pipes have been jolted out of their holes. Without electricity we can’t test the wind supply, but we all feel a sense of relief that it could have been so much worse. The ladder up to the Swell and the new Oberwerk is broken so we can’t see what has happened there.

I try to take photos from all angles in the cramped
conditions, fighting a mounting wave of claustrophobia and panic. It’s a relief when we shuffle into the daylight, to wend our way back through the deserted, silty streets, out of the off-limits Red Zone cordon.”

An earthquake!  Compelling — forceful, demanding attention, convincing, and having a powerful and irresistible effect!