Find out in this simple infographic what today’s audience is looking for and what we do to fill that need. 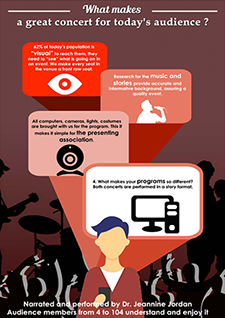 Click on the image to view at full size.

An Historic Organ from 1750 in Newton, Kansas!

The Teschemacher Organ built in 1750 now resides in the Kauffman Museum in Newton, Kansas.  It was meticulously restored by the Noak organbuilders and is beautifully displayed in its own museum hall.

The lovely cabinet organ of six stops was built in 1750 by Jacob Teschemacher for the Dutch Mennoninte minister, Johannes Deknatel who resided in Amsterdam.  The little organ was brought to America in 1868 and was donated to Bethel College in Newton, Kansas in 1910.

In this country an instrument dating to 1750 is extremely rare, so it was with great excitement that I learned of this instrument and was quickly able to make arrangements to spend several hours playing this exquisite gem of an organ.  It is yet another piece of the history of the organ in the colonies and United States.

To learn more of this important aspect of the history of music in America, visit www.fromseatoshiningsea.org.

Dr. Jeannine Jordan, concert organist and creator of the organ and multi-media concert experience, From Sea to Shining Sea.